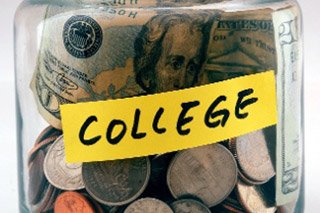 Statistics like these underline the importance of saving and investing to fund a university education, but that effort has become optional to many. In its annual How America Saves for College survey, Sallie Mae found that only 48% of U.S. families with at least one child younger than age 18 were saving for college at all. Among those that were saving, the average 2015 amount was $10,040 – the lowest figure in the 7-year history of the survey. It is little wonder that 22% of college costs are covered by either parent or student borrowing.

First, save with realistic assumptions. Outdated perceptions of college expenses can linger, so be sure to replace them with current data and future projections.

Consider a tax-advantaged account. Remarkably, Sallie Mae’s 2015 survey found that just 27% of households saving for higher education had chosen 529 plans or similar vehicles. Nearly half of the households building college funds were simply directing the money into common savings accounts, giving those dollars no chance to significantly grow or compound through equity investment.

If you open a tax-advantaged account, fund it adequately. Some states have established very low contribution minimums for their college savings plans. That does not mean your contribution should be at or near that level.

Explore your options with regard to these accounts. You can participate in any number of state-operated college savings plans, not just the one in your state. Another state’s plan may offer you different tax breaks or incentives. Many of these plans now offer more investment choices than they once did, in addition to the traditional age-based options. You can also change the way you invest assets in these plans, sometimes as often as twice a year.

Think twice about opening a custodial account. Uniform Gifts to Minors Act (UGMA) and Uniform Transfers to Minors Act (UTMA) accounts were fairly popular at one time. About 10% of parents saving for college still use them, but they have distinct drawbacks. They do not offer tax-advantaged growth, and until the child turns 24, account earnings above a certain threshold are taxed at the parents’ highest marginal rate instead of the child’s lower rate. The money inside the account is considered an irrevocable gift and an asset owned by the student – a real demerit when trying to claim financial aid. Also, when the student reaches the “age of majority” (typically 18 or 21), the money can be used for anything the student desires.

Set a specific savings goal – perhaps with certain schools in mind. Some parents build college savings without any real goal of how much to save, not knowing the university their children will attend. Defining the destination should be part of the strategy. It is perfectly okay to tell your children that you will be saving $X for college by the time they are 18, and that they may have to strive for scholarships and grants if they want to go to especially costly universities.

The biggest blunder is not saving for college at all. As tuition costs continue to rise, getting any kind of head start on funding a university education is a must on a family’s financial to-do list. While financial aid is certainly available, it rarely absorbs 100% of college costs.

If you save $300 per month for college for 10 years and that money earns 7% a year, your college fund will grow to $52,228 a decade from now. If you borrow that much in Stafford Loans, you will owe about $600 per month for the next ten years and pay about $20,000 in interest along the way. A notable contrast and an argument for building a college fund.